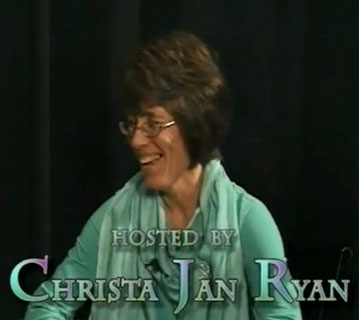 Award of Hope from the Center of Family Services in Camden, New Jersey.

Prayers that have found their way Globally for National Prayer Day.

Currently producing 3 TV shows in the Northeast region of which 2 have won awards for 3 years.

Christa Jan Ryan is an author, speaker and producer. Her current book Award Winning Best Seller ‘Silent Screams from the  Hamptons’  is a memoir set in the fabulous Long Island Hamptons and based on her experiences with clients. Interwoven are events from her troubled marriage of 24 years and the ever-present shadow of her improbable family of origin. Her unique style—attacking  profound issues with humor—makes for a compelling read.

You know your having a bad day when … I believe in laughing at the ironies in life.

Previously, as a coping tool, Ryan transformed her grief over the loss of a child into her first book, From the Depths of a Woman’s Soul: Surviving the Death of an Infant. She infused each page with compassion and honesty, recounting how uncontrollable anger and paralyzing despair tore apart herself and her entire family. The book (self-published) has been lauded by SIDS (Sudden Infant Death) and other support groups. Today, she reaches grieving families through her presentations.

A lot of people take everything too seriously!

For thirty years, Ryan has been a landscape designer for the rich and famous. Among her notables projects with World Renown Architects: the Thomas Church archives in Berkley University, East Hampton (1990); several installations with Edmond Hollander in Bridgehampton and North Haven, New York (1996), (2000); the Alice Ireys archives in Smith College, photographed in the coffee table book, Social Gardens, (1988); with Dorothy Carter, the archives in Cornell and the Hampton show house in Quoque, featured in ‘House’ magazine, Lifestyle of the Island (1998) Ryan holds a degree in Landscape Management from Farmingdale University.

Ryan lives with her two sons and two cats in the Western Berkshires, where her writing provides a renewed sense of purpose.

I left the Hamptons in 2008 and was able to sell my business and house 2 weeks before the crash. Gods timing is always so perfect. I settled in Great Barrington and opened a store that supported buying clothes from Nepal that the proceeds went back to help orphanages that bought back young girls from prostitute centers in Thailand. I also opened up a Sober house for Women who were newly out of Rehab.